“That conversion rate is worse than DiCaprio’s.”

When I spotted this line scribbled on the whiteboard at my husband’s office, my stomach flipped. I went from zero to nervous in a heartbeat.

Was it simply a clever joke his team wanted to remember for an extra week?

Or was his business in trouble?

Here’s why I panicked: if anything you offer converts worse than Leonardo DiCaprio, you may not be in business very long.

If anything you offer converts worse than Leonardo DiCaprio, you may not be in business very long.

Poor Leo. In this case, “convert” means winning an Oscar. He’s been nominated 5 times (What’s Eating Gilbert Grape, The Aviator, Blood Diamond, and twice for The Wolf of Wall Street) but has never taken the stage to receive the statuette.

“Will it ever happen for him?” has become a pity-filled refrain repeated by most Hollywood reporters. (And those who discuss the rise and fall of actors over Valentine’s Day steaks. That’s just how we roll.)

But if we were digging into your numbers and you quoted me your conversion rate, my first question would be this:

“What’s the context of this number?”

I’d ask this regardless of how high (or low) your conversion rate was. Without the context, it really doesn’t tell me anything.

Were you surprised to learn that Leo had only been nominated for five Academy Awards (and for only four films in total)?

I was. Given the fuss that people make about this (“Will it ever happen for him??”) I just assumed he had been nominated a LOT more times.

Another fun fact: Leo’s only made 28 films. I would have put money on that number being a lot higher! But nope: just 28 plus a handful of TV shows.

Here’s some data about “high-converting” actors at the Oscars compared to DiCaprio:

As you can see, Meryl Streep leads the pack with a shocking 19 nominations and 3 wins (which might be 4 as of this Sunday). That’s only a 15.79% conversion rate. (That’s still better than 0%, though, right Leo?)

But I want you to focus on the context of these awards. Only one person wins in each category per year. That means the likelihood that any given actor will “convert” to an Oscar winner each year is ridiculously small.

The most interesting number for me is not their nomination-to-award conversion rate, but rather their films-made-to-nomination conversion rate. Because Joe Shmoe Actor could make 200 films and never be nominated for an Oscar. That tells you something REAL about his talents (or his inability to land good parts).

Streep’s been nominated 19 times. 19! But she’s only made 55 films so far. That means her films-made-to-nominations conversion rate is 34.55%. She’s been nominated for more than a third of the films she’s made. That’s insane when you think about it!

The only person on this chart that comes close to that films-made-to-nominations conversion rate is Daniel Day-Lewis with 20%. (He’s made only 25 films and been nominated for 5.)

The difference between him and Streep, however, is that he has a higher nominations-to-award conversion rate (60%, or 3 awards out of his 5 nominations). 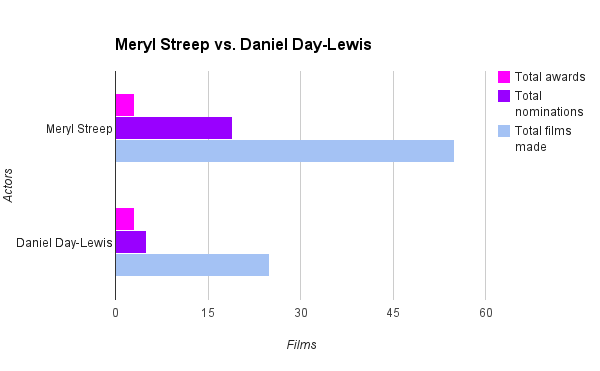 This is where context is really important. You can’t look at these nominations-to-awards conversion rates alone and determine who is a better “converter.” If you did, Day-Lewis would easily beat out Streep with his 60% versus her meager 15.79%.

But when you take into account the number of nominations they’ve both received along side the total number of films each has made, it’s clear that Streep has had a much more fruitful relationship with the Academy of Motion Picture Arts and Sciences.

Are you looking at the context of your conversion rates?

Time to bring this all back to your data diving. When I start tracking conversions on a new landing page, I know that a small set of data isn’t going to give me an accurate look at how well it’s doing.

Leo DiCaprio, Oscar noms and the truth about conversion rates in your business.

Usually when you create a new landing page for a webinar, ebook or free challenge, you email your list about it. Your subscribers – people who already know, like and (hopefully) trust you – are the first to visit your page and sign up. But this traffic will give you inaccurate data about your conversion rate.

Subscriber traffic is what’s known as “warm” traffic; they’re already predisposed to raise their hand and say “I’m in” to anything you offer them. Whereas you have to work hard to convert “cold” traffic (which comes from sources like Google or Facebook ads) with a highly optimized landing page.

When you put warm and cold traffic together, you’ll start to see what your true conversion rate is. And the more traffic the better: 10 opt-ins out of 25 visitors is NOT “statistically significant.” This is why I don’t let my clients make decisions on the effectiveness of their Facebook ads after only 20 clicks to their website.

(More is obviously better, but I’d say 40+ website clicks is enough to start analyzing your campaigns. Note that there’s a difference between Clicks and Website Clicks. Check your reports.)

Look at the RIGHT Context

When you’re measuring your conversion rates, make sure your “context” is the right one. If you go to Acquisition > All Traffic > Source/Medium in Google Analytics, you can see your sign-up conversion rate for all your different traffic sources (so long as you’ve got a goal set up).

But if you want to see how an individual landing page is converting, check out a different view:

The conversion rate of all-site-traffic-to-subscribers is always going to be much lower than traffic that reaches your specific landing page.

You can even click on your landing page url in that report and get more data about which source has the highest conversion rate: 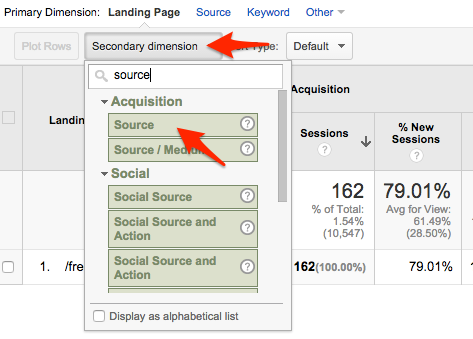 Lessons learned? You need to pay attention to conversion rates as well as the context around them.

I hope you enjoyed this post inspired by my obsession with Leo’s ongoing struggle to land that statuette. Next week on the blog we’re going back to landing pages and how small tweaks to your design can make a HUGE difference in converting cold traffic. Don’t miss it – sign up and get that post sent straight to your inbox.